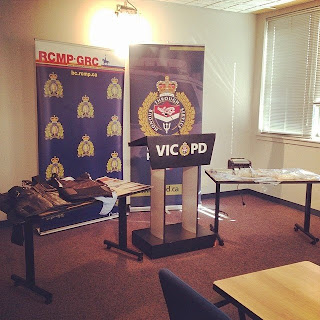 The Victoria News is reporting that a raid by West Shore RCMP and Victoria PD has resulted in cash, guns, bullet-proof vests, over half a kilogram of cocaine, along with heroin being seized in a raid of five houses in Langford and Colwood. The search has led to the arrest of two men, including an alleged gang-related drug dealer.

Wednesday's searches were the culmination of an investigation which has been ongoing since last July and targeted two men, one of which police say has ties to the Red Scorpion gang active in the Lower Mainland. Dezmond White and Abraham McMillan have been arrested and charged with possession of a controlled substance for the purpose of trafficking.

It's not nearly as much as the 10 kilos of cocaine seized tied to the Nanaimo Hells Angels but it's good to see the pressure being kept on the smaller Hells Angels puppet groups selling drugs on their behalf. As we know the Hells Angels took over the Red Scorpions after the Surrey Six and made them work for them just like the Independent Soldiers.