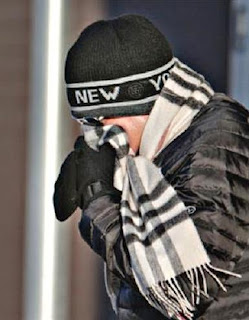 CBC is reporting that Saskatoon Hells Angel Jesse Bitz will stand trial in October for uttering threats. Bitz is accused of threatening to kill Leonard Banga, the owner of Xtreme Mining and Demolition. The pair had a dispute which led Banga to fire Bitz. That's when the alleged threats took place. Rather amusing how he hides his face after being accused of making death threats.

"Xtreme Mining and Demolition enacted a new hiring policy in the fall of 2013 to prevent individuals with a history of violence and/or involvement in organized crime from working in safety sensitive situations." Three of the Hells Angels fired after the policy change are now threatening legal action while the province of is considering following Manitoba's lead by declaring the Hells Angels a criminal organization. That would certainly make it easier for employers to clean up links to organized crime. Too bad they won't do that with the Longshoremen here.

January of last year four longshoremen were shot at a gathering after allegations of missing pension funds were made like in New York. That was a Jimmy Hoffa trick back in the day.