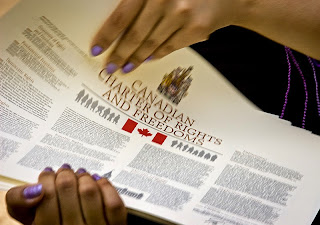 How's that for a headline? Law Society Bans Gay Lawyers. Or how about Law Society Bans Jewish or Muslims Lawyers. How would we feel about that? First of all it would be illegal. Second of all it would be wrong. This is what comes to mind when I read an astounding editorial in today's Vancouver Province. The editorial sates that Law Societies are wrong for caving in to activists calling for them to refuse to allow graduates from TWU's law program to be certified. I didn't even realize such an outrageous criminal act was even going to a vote.

It's no different than banning anyone who is Gay, Jewish or Muslim from being a lawyer. It is discrimination on prohibited grounds. Clearly some are concerned about the fact that Trinity Western University is a Religious private school. Does that means these unlearned enemies of the Charter of Rights would decertify the Columbus School of Law at the Catholic University of America because that is exactly what they are trying to do. It is illegal and wrong to do so.

There are two cardinal sins of a free republic. The first is adopting a single state religion. Everyone has to be Catholic, or Church of England or Buddhist or Muslim or whatever. The second is like unto it. Banning religion altogether. A free republic does neither. A free republic means an Atheist and a Christian are both allowed to become lawyers.

This is exactly why some religious groups oppose the legalization of gay marriage. They are afraid that once they allow it, they will force all religions to perform it against their will or lose their charitable status. That would,be absurd. The United Church of Canada came up with the logical compromise. Allow gay civil marriage and allow individual religions to perform gay marriage if they chose but do not force them to do it against their will because that would violate their religious freedom. It's as simple as that.

In contrast, refusing to certify graduates from the TWU law school is no different that refusing to certify a gay lawyer. Both are wrong and illegal. Another concern they raise is the University's moral code. If this wasn't such a criminal act it would be laughable. Why does it not come as a big surprise that the Law society do not want to certify lawyers who have moral standards? Kinda like the saying, what do you call 10,000 lawyers at the bottom of the ocean? A good start.

Nova Scotia says it will accredit Trinity Western law graduates — but only if they drop their gay sex policy. You can't do that. It is illegal. That's like saying they will accept Christian lawyers if they renounce Christ or Muslim lawyers if they renounce Mohammed or Gay lawyers if they renounce their orientation. That is religious discrimination and is illegal in a free republic. This doesn't come to a popularity vote. What if everyone got together and said they wanted to ban Islam from Canada. It doesn't matter if the majority of Canadians voted in favor if doing so. It would be illegal according to our Charter of Rights. That's all there is to it. The fact that this discussion is even on the table is astounding. Banning lawyers from having moral standards or religious beliefs is not what our soldiers died in the trenches for. It is exactly what they fought against.

Tony Wilson, a Vancouver Lawyer who states that he is an atheist who voted in favor of accrediting TWU Law school grads pointed out that the current case law upholds the Charter of Rights. The Trinity Western University v. B.C. College of Teachers case is still the law of Canada. That 2001 case, from the Supreme Court of Canada, determined that the B.C. College of Teachers could not deny accreditation of TWU’s teaching degree. So clearly what they are doing now is in violation of the Canadian Charter of Rights as well as the subsequent case law upholding it.