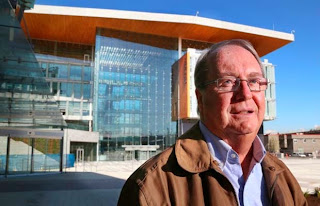 The Vancouver Sun is reporting that Surrey's former mayor, Doug McCallum, says the glitzy new city hall is "wasted taxpayers' money." The article quotes him as saying "I don't agree with it. I don't agree with moving it and the costs associated with it. I think it's going to show up in hurting the community in some places, as far as being able to build city facilities, because all the money's been spent here," he said. "When I was involved in council there was often talk (of building a new hall), but we said no."

"We had a good city hall, and we spent a lot of money fixing that up not long ago. So the council at that time was very much against it... City council shouldn't be spending the money, basically, on themselves." McCallum referenced the 2003 renovations to the old city hall, which cost around $9 million. As well, the city spent roughly $1.3 million in renovations in 2007.

The Surrey City Development Corporation was behind the city hall and civic plaza project, and McCallum calls for the corporation to be disbanded, claiming its existence creates a conflict of interest. "A development company where the shareholders are council are in a conflict of interest when it comes before them to vote on it. It's like voting for themselves. It's a huge, huge conflict," McCallum said.

Exactly!!! Let's bring Doug McCallum back! Dianne Watts conned us. She promised us the moon on crime prevention and did the exact opposite. She taxed and spent us to the moon instead while she let drug related crime in Newton and Whalley skyrocket off the charts. When Doug McCallum was mayor the city evicted crack houses onto the street. I saw it. He put pressure on the crack dealers. Dianne Watts has not. End of story. .