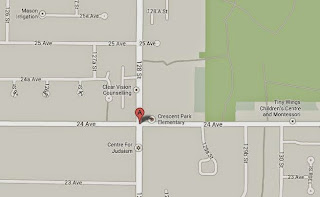 The Voice reported that Dianne Watts civil suit was scheduled to be in court June 17 2014 at the BC Supreme Court in Vancouver. This civil suit was in relation to a car accident she was involved in on April 23, 2010. Laila Yuile has reported on the background of the case. I am told the case has now been settled out of court but am trying to find a link confirming that. The Voice did report on February 14th 2014 that it was scheduled for June 17th. It is possible they made an error as the secret settlement hasn't been mentioned in the media yet.

Lets' look at the scene and determine believability of the conflicting claims. Police say Watts was driving her white Cadillac SUV east on 24th Avenue when it collided with a dark-coloured sedan heading north on 128th Avenue around 11 p.m. 128th is the main road and 24th is the side road that intersects it. Locals who are familiar with the intersection claim that the mayor's story is not believable because it is a demand light.

Since 128th Street is the main road, it normally has the green light. For that light to change, you have to stop at the intersection on 24th Avenue to trigger the demand light. Since we know the other vehicle was traveling down 128th street and that the mayor was traveling along 24th Avenue, it was not physically possible for the mayor to t-bone the other vehicle if she had the green light since she would of had to have come to a complete stop to trigger the demand light first.

If Dianne Watts is found culpable in this case there is no way the taxpayers of Surrey should be held liable for her negligence. If I get in a car accident on my way home from work or a work Christmas party, my employer is not responsible for my car accident. 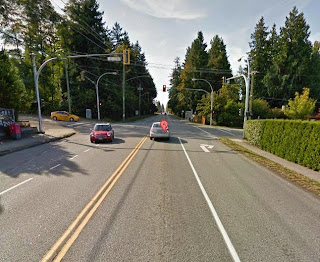 Update: Ironically Global and CBC are reporting that Dianne Watts has just announced she will not seek reelection as the Mayor of Surrey. Oh Happy Day. The Globe and Mail reported that the local concerns with the crime she failed to address would have made her reelection difficult. This announcement fuels speculation that she will be running for Stephen Harpers tax and spend NeoCons in Whiterock federally since the BC Liberals have dumped her. What a perfect place for her. That way she can continue the same old con about reducing taxes and spending then do the exact opposite when in power. Pork Barrel Politics strikes again.