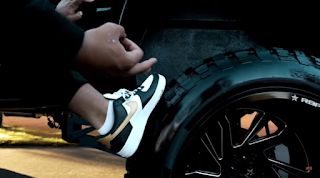 CBC is reporitng that Naseem Ali Mohammed "was arrested Monday near Seattle during a robbery at a hookah lounge, according to the U.S Border Services." He is accused of trying to steal a gold ring. I guess he blew the $30,000 the Hells Angels gave him.

OK so let's do the math. The U.S. Border Patrol Agent said Mohammed was a high-ranking member of the Brothers Keepers gang in Surrey, BC. Well that's our crib.

Naseem was the connection between the Brother's Keepers and the Driftwood Crips. This ponzi scheme maintained the Hells Angels plausible deniability and kept finger puppets loyal with the promise of more money. Yet as soon as they paid Nasseem, they rolled on him.

The Hells Angels are still the root of all this violence. Follow the rich white man.

Before Naseem successfully crossed the US border in Montana, he previously tried to cross the border with three other Driftwood Crips two of whom were also wanted for murder. How do you think these guys become wanted for murder right after the Hells Angels hired them? The Hells Angels reported them to the police because that's the way they roll.