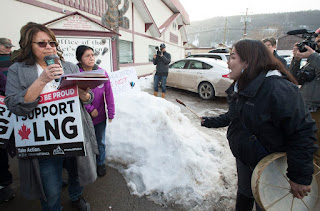 It appears that exploitation in the Wetʼsuwetʼen Nation is heating up again. Let me once again address Communism and Fake Environmentalism. Communism is where the democratic will of the people is highjacked and their civil liberty is removed. That is exactly what we see the mainstream media support in the Wetʼsuwetʼen Nation. We saw how the elected leaders were abused by the man who would be king and we see it continue now.

Natural gas is good. Industrial coal is bad. Fake environmentalists don't care because they don't care about the environment or reducing CO2 emissions. They care about power and control so they can oppress and exploit. Building a natural gas pipeline to Kitimat is a good thing. Fake environmentalists claim all pipelines are bad. That is a lie. Natural gas is clean burning. If Communist China converted their industrial coal plants over to natural gas, CO2 emissions would be greatly reduced. The air quality in that area would profoundly improve.

Driving the Natural gas there by way of semi-trailers would burn a huge amount of diesel fuel. A pipeline eliminates that and once again reduces CO2 emissions. Kitimat is a better place than Vancouver because the Port in Vancouver is already busy. Diverting more tankers to Prince Rupert would also reduce tanker traffic in Vancouver's restrictive port.

Mohawks from Quebec do not have claim to the Wetʼsuwetʼen Nation. The man who would be king is recruiting help from outside to exploit his people who voted for someone else. Remember the 2010 Winter Olympics in Vancouver? It was a wonderful event.

Before that event Communists and Anarchists tried to use violence to prevent it from happening. White Anarchists heckled and booed First Nation hereditary Chiefs playing a song on their prayer drum. They didn't care about hereditary chiefs back then. Just like the media doesn't care about the 72% of unvaccinated Blacks in New York. Hereditary chiefs and Black Lives only matter to the media when they crush democracy as they promote Communism and exploitation.

The LNG pipeline is indeed a struggle between good and evil. It is a struggle between improving air quality and polluting it. All of us have hereditary traditions. Some of those traditions were good while others were bad. While we debate the inherit right to self-government and hereditary privilege, we need to discuss the tradition of kidnapping and forced slavery within the Coast Salish. They would raid the tribe in Fort Langley and carry away slaves. The British fur traders protected the local natives from that exploitation. Slavery is bad and we should not emulate it.

"On May 14, 2020, the governments of Canada and British Columbia signed a Memorandum of Understanding (MOU) with the hereditary chiefs of the Wet’suwet’en, in which the Canadian and B.C. governments recognize that Wet’suwet’en rights and title are held by Wet’suwet’en houses under their system of governance. Following concerns by leaders of the band councils, the hereditary chiefs clarified that the Office of the Wetʼsuwetʼen is not a governing body, and that the authority of the band councils under the MOU would not be diminished."