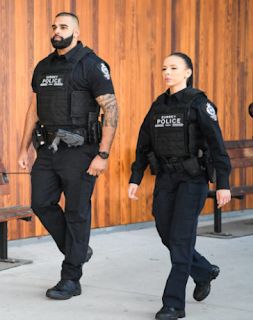 Alaska Highway News is reporting that "Surrey residents can expect to spot an anomaly in their police force starting Wednesday. That's when 29 Surrey Police Service (SPS) officers are expected to deploy alongside the Surrey RCMP as a first “boots on the ground” step to transitioning from the federally regulated department to the new municipal unit. The B.C. government approved the switch — championed by Surrey Mayor Doug McCallum — in February 2020." Jacked and Jill are sporting the new Surrey uniforms.

"The RCMP says in a statement that experienced officers with the new Surrey Police Service began orientation Monday, and each municipal officer would be paired with a Mountie for a few shifts before heading out to respond to calls in RCMP-branded vehicles." The National Post.