Dealing with BC's State of Emergency 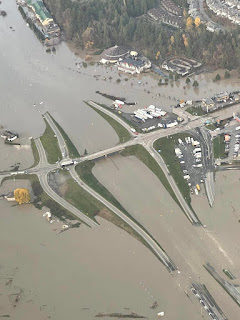 Whether or not John Horgan's NDP or Justin Trudeau's Liberals announce it, BC is in a legitimate state of emergency that could have easily been avoided and I'll tell you why.

It has been raining very hard almost nonstop for the past two months. Sunday another storm hit that the media referred to as an atmospheric river which was more of the same - heavy rain. Consequently, many rivers have overrun their banks which has caused flooding.

Merrit has serious flood damage where the flood has contaminated the drinking water. Having contaminated drinking water is one thing but not being ble to flush your toilet is another. You can buy drinking water at the store. Well, some of us can which leads us to the real emergency the media is ignoring. Locally, Castle Fun Park is under water but no one cares about Castle Fun Park. The problem is that park is right beside the freeway and if the Fun park is flooded so is the freeway which is a major transportation hub.

The Coquihalla has been shut down because the rising river has washed out the road and a bridge. That in itself isn't a big deal because before the Coquihalla was built people would take the Hope Princeton highway. However, that is closed from flooding and mudslides as well.

Why does this matter?Those transportation routes are what trucking companies use to supply local stores with food. Now all of a sudden, all the grocery stores in Kelowna, Vernon, Kamloops, and Prince George will have no food. That is a legitimate emergency.

While the media is dramatizing the emotional side of the event, instead of focussing on saving cats from trees, we need to get one of the routes open so the grocery stores can get food. That is a number one priority. Mike Farnworth is a nice guy but he is not in touch with reality. He's running interference in the media saying it's going to take a long time to get the Coquihalla repaired because we have to make sure it's safe. He's thinking liability from recreational traffic. He's not thinking about all those communities starving without food.

We're fine in Vancouver. We have the port and the border is open. We can't get our beef from Brooks, Alberta but we can get most everything else. Pork and produce come from the border and chicken is local. He needs to make getting one of those routes open his number one priority.

In times of war, the army can build a bridge because attacking supply chains is a common goal in war. We need to bring the military in not to impose martial law, but to build a f*cking bridge because it's their fault this happened. Every year people who live in the flood plain have to be aware of rising river levels. This is nothing new. Previously the media would report on this.

This flooding didn't happen overnight. It has been raining almost nonstop for two months. No one has said a word about rising river levels. In previous years the media would report on it and when the water levels rose, we'd all be out there sandbagging. This year not a word. Thanks to Post Media News. It's as though they wanted this to happen.

The old problem, reaction, solution paradigm. Personally, I don't think they planned this. I think they are just completely useless and it was caused by their criminal negligence. The NDP is not the government you want in charge during an actual war. The same thing with Justin Trudeau.

In a real emergency those clowns need to step aside and sit it out. Environment Canada is federal. They monitor the weather and are supposed to monitor rising river levels. That would be Justin Trudeau's error. Yet ignoring the rising rivers and not having us sandbag beforehand falls on John Horgan. They are both criminally negligent. Regardless, the solution we need is to get one of those transportation routes open. That is the number one priority. 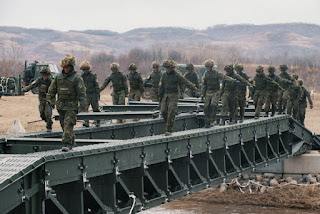 Costco will no doubt be the first private company to find a solution and that they have. Normally they ship to those communities out of Vancouver. Since the freeways there from Vancouver are washed out, they are rerouting the product to those communicates out of the distribution centre in Airdrie, Alberta. The roads to Kelowna, Vernon and Kamloops are open from Airdrie so other groceries stores can get product from there as well. No thanks to John Horgan or Justin Trudeau.

In Surrey, 88th Avenue at 176th Street is in the flood plain. Whenever it floods, that road closes. That's why they have a gate on the road. Yet I drove down there today after work and the road is open. The water is high but the road is fine. Abbotsford, Sumas and Chilliwack has flooding. I took the 401 freeway from Surrey to Abbotsford and made it to McCallum Road. That's where they force you off the freeway going east. The road sign said the 401 freeway was closed east of Sumas. I don't know about side roads or alternate routes because that's not my crib.

In Langley there is a senior's home near the Nicomekl river where the ground floor is completely flooded with water. The residents are stranded in their rooms on the upper floors. this is completely unacceptable. We can mobilize volunteers to sandbag through the Red cross because the government and the media is completely useless.

Families can also apply for assistance through the red cross. You can donate to the Red Cross online or through your United Way payroll deductions at work.