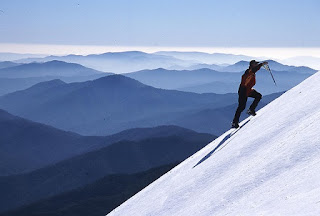 Recently I made a blog post about how people normally view politics as a horizontal line of left versus right. I explained how I normally see politics as a circle. Draw a line in the sand and call it democracy. The further away from that line you get to the left or the right, the further away you get from democracy and the closer you get to dictatorship. After all, Communism and Fascism are the same thing. They both represent total control and no freedom. 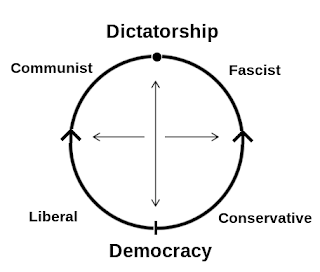 Then I said I have a new view. I went back to the horizonal line but put Fascism on the left beside Communism because one leads to the other and they both represent more government control and less freedom. I simplified the equation by putting Socialism on the left and Conservative on the right. The other day I realized what I had done. Instead of drawing a horizontal line through the circle, I drew a vertical one. This makes more sense.

Conservatives believe in a free Republic where civil liberty is protected by law. Communists say that but do the opposite. Take North Korea for example. North Korea calls itself the Democratic People's Republic of Korea. Yet it's not a democracy and it's not a republic.

Now I'm not hating on North Korea. I don't support sanctions against North Korea or Cuba. Bending over for Communist China but sanctioning Cuba and North Korea is nonsense. China's human rights violations are far worse than Cuba or North Korea and they are far more invasive.

I'm simply saying North Korea calls itself the Democratic People's Republic when in reality it is neither. I hesitate to use the term democracy now. In my old circle I compared Democracy with Dictatorship. In my new vertical line laid our horizontally I compare freedom with slavery. I support freedom. However, a free republic isn't necessarily a complete democracy.

Likewise if the majority of the people say, we're going to take your car, your house and everything you own, the Republic forbids it because those are all protected by law. That is why the CPP are trying to destroy our republic. They want to take away everything we have - all our money, all our possessions and all our freedom. They want to make us slaves by convincing us that slavery is happiness. Not. They want us to want it through their persistent brainwashing.