Shooting in Naramata, BC 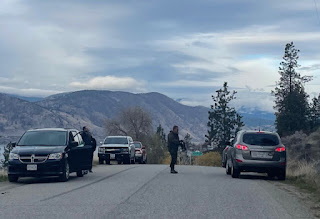 Castanet is reporting that "Police have confirmed one man was shot on Indian Rock Road north of Naramata Tuesday morning. RCMP responded to reports of shots fired at 7:30 a.m. and found a 36-year-old man outside of a residence, who was conscious and asking for help and suffering from a gun shot wound. BC Ambulance took the man, who police say is known to them, to an area hospital. His wounds are not life-threatening. A nearby vehicle fire on Gammon Road at Gawne Road is currently being investigated as possibly related. The vehicle went up in flames in around the same timeframe as the shooting."

The Vancouver Sun is reporting that the police say it was a drug-related shooting.