Surrey Shooting not gang related - much 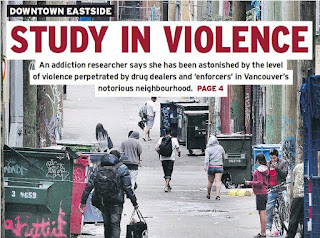 The Vancouver Sun is reporting that "Surrey RCMP are investigating after a man was shot and injured in a Whalley home early Friday morning. Officers went to a home in the 11100-block 136th Street at around 1 a.m. and found a man bleeding from what looked like a gunshot wound."

"He was taken to hospital where he was treated for non-life-threatening injuries. Another man was arrested at the scene. Police believe the two men know each other. 'This is believed to be an isolated incident with no ties to the Lower Mainland gang conflict,' said Cpl. Vanessa Munn of Surrey RCMP." How can it not be related to the Lower mainland gang conflict? If two crackheads shoot each other, it's indirectly drug related. Where did he get the gun from?

Almost all the crime and violence in the DTES is drug realted.