Double homicide in Crofton, BC on Vancouver Island 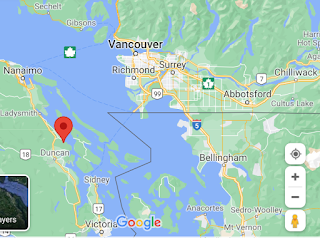 Check News is reporitng that "Mounties in the Cowichan Valley are investigating a double homicide after two people were found dead inside a home in Crofton. North Cowichan/Duncan RCMP officers responded to a residence 8600-block of Crofton Road on Oct. 23, where they found two people deceased along with another man, according to a press release. They say the man found inside the home was arrested without incident and remains in custody."

Update: Check News is reporting that "The victims of a double homicide that took place in a small southern Vancouver Island community over the weekend were a father and son who had recently taken in a childhood friend — the same man who is now accused of their murders, according to family members. Justin James Dodd, 33, has been charged with two counts of second-degree murder after the bodies of Brad Johnson, 35, and his father Tom Johnson, 57, were found in a Crofton home just after midnight Saturday."

Posted by Dennis Watson at 1:05 PM