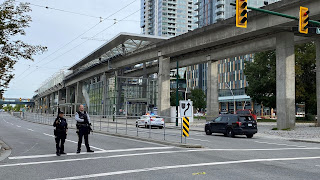 Update: Evidently it was a prank and a youth is in custody

City News is reporting that "Metropolis at Metrotown in Burnaby has been evacuated due to a police incident in the area. Burnaby RCMP say there are unconfirmed reports of shots fired, and the mall is being searched. Transit Police were also looking into unconfirmed reports of a pipe bomb, however, that has been cleared. RCMP say there is no evidence of an active threat, nor any injuries." Burnaby RCMP said shooting scare at Metrotown mall unfounded.