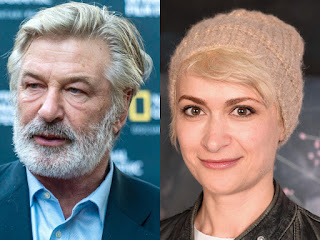 As we know, a tragic accident has occurred on the movie set for Rust in Sante Fe, New Mexico. Alec Baldwin shot Halyna Hutchins dead with a prop gun and injured director Joel Souza. The LA Times is reporitng that there was a walk out on the set the morning of the shooting over gun safety. People is reporting that "A text message sent by a colleague to the unit production manager read, We've now had 3 accidental discharges. This is super unsafe."

CNN, the worlds fake news network, assures us that the court was told the gun Baldwin shot Halyna Hutchins with was safe. How could the court be told that already? He's not on trial. Just because the court was told something, doesn't mean it's true. Gun safety was a concern on set.

Obviously, this was an accident yet it could have been avoided. Apparently, the term cold gun means it doesn’t have live rounds. Obviously, someone else is going to take the fall for Baldwin’s accident. I realize movie sets are busy places and if someone in charge says this gun has balnks one would assume it has blanks. How then did the mistake occur?

In Canada, if someone hands you a firearm and says it is unloaded, the onus is on you to open it to confirm it is unloaded. I'm not sure if that is practical on a movie set that use blanks. Checking to see if it's unloaded and checking the difference between a live round and a blank are two different things. Yet even if it's unloaded, you never point it at a person. Obviously you do on a movie set which makes gun safety paramount. Taking the time to assure it's safe.

Years ago, a friend was talking about Alec Baldwin and one of his kids. For some reason when they said Alec Baldwin, I thought they meant the character that plays Victor Newman on the Young and the Restless and I thought to myself AYFKM? I had the wrong person. I don't follow Hollywood much. Especially now that it has been taken over by Liberals and Communists.

Marca is reporting that a Baldwin Tweet from 2017 has gone viral since the shooting. The tweet was a comment on a police officer shooting a suspect on Huntington Beach and said "I wonder how it must feel to wrongfully kill someone." Very tragic indeed.

Update: CTV is reporting that "The assistant director of the movie that Alec Baldwin was making when he fatally shot a cinematographer was fired from a previous job in 2019 after a gun went off on a set and slightly wounded a member of the film crew, a producer said Monday.

"The disclosure emerged as producers of Baldwin's movie officially halted filming, and court records showed that investigators seized more than two dozen items from the set on the day after the shooting." In an email statement to The Associated Press, a producer for the movie "Freedom's Path" confirmed that Dave Halls was fired from the 2019 production after a crew member suffered a minor injury 'when a gun was unexpectedly discharged.' The producer, who asked not to be identified by name, wrote that Halls 'was removed from the set immediately.' Production did not resume until Halls was gone."