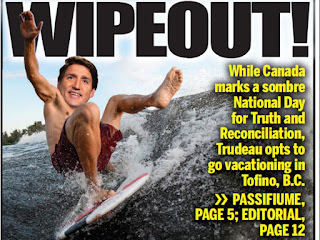 Yesterday was Truth and Reconciliation Day. Both terms are very important and very misrepresented. Before I dive in, I will point out the obvious. Justin Trudeau is an idiot. Not only is he a fake feminist and a fake environmentalist, he is a fake advocate for Aboriginal rights. Jody Wilson-Raybould is First Nations and Justin Trudeau threw her under the bus. 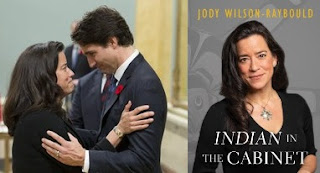 Justin Trudeau is all talk, no action. He pretends to be an advocate for Aboriginal rights and even sets aside a national day for it, then goes surfing during the official ceremonies. Having said that, there is a lot of misrepresentation about the residential schools and it's important to see where it is coming from to understand it's true motive.

The Communist Party of China is once again trying to rewrite history and teach us to hate Canada and to hate America. They want us to hate freedom so we give it up and become their slaves. While they do that they want to distract us from their crimes against humanity.

The Tibetan monks are Aboriginals in China who are bitterly persecuted and tortured. This is how Communism treats Aboriginals. They use them and abuse them just like they do to everyone else. The reason we need to recognize that is so we understand the twist the media is putting on our history and the motive behind it.

Let's start with the discovery of unmarked graves in Kamloops. First, this was not a new discovery. They were mentioned in the 2015 Final Report of the Truth and Reconciliation Commission of Canada. Second, it wasn't a mass grave it was an unmarked grave. Children who mostly died of tuberculosis and were given proper burials only to have their graves forgotten about years later. It wasn't a place where children were executed and buried en mass.

People ask why were they buried on school grounds? For the same reason they used to bury people on Church property. It was cheap and people back then were poor. I'm not saying that residential schools were nice places to be. England had a long history of sending kids off to boarding school and they all hated it. Education is a good thing. They meant well. Yet how they went about it was wrong. Forcing kids from their families wasn't a good thing.

The intent was to provide free education and it wasn't financially feasible to build schools in every rural setting across the country. They bult the schools and brought the kids to the school. Culture is another thing. Teaching kids their culture is bad is toxic and completely unacceptable. We don't do that anymore. Now we cherish First Nation traditions.

When I was young my father used to take me to White Cliff part and take pictures of the sunset. He would read to me the legends of Vancouver as recorded by Pauline Johnson. He would even take me to the Pauline Johnson memorial at Third Beach in Stanley Park to remember her.

My father had ties to the Squamish First Nations and taught me to respect the ancestral heritage of this land. Yet no one is any better than anyone else. All people are equal. We need to remember that. As soon as we start to introduce special rights, we are deviating from the equality and brotherhood of mankind. The Coast Salish practiced slavery. That was not a good thing.

The Natives in Fortl Langley got along well with the British settlers because the British traded with them and protected them from rival tribes that would raid them and kidnap slaves.

These are the same people trying to rewrite our history and trick us into hating Canada and the freedom loving mosaic it represents. by tearing down statues of John A MacDonald.

John A MacDonald was a Protestant. Blaming him for something the Catholic Church did is displaced aggression. It wasn't his fault. Yet the Communists lie and try to tear down all the good we have done and strive to accomplish because they resent it.

Reconciliation means coming together not tearing appart. It means respecting our differences and building upon our strengths. It means embracing the sacred hoop and empowering people to succeed. It doesn't mean teaching people to be victims and hate each other. To reconcile means to restore friendly relations between. This is the purpose of the Truth and Reconciliation Day.

Truth and Reconciliation Day should not be a day of mourning. It should be a day of potlatches where we celebrate Aboriginal culture and our diversity welcoming everyone at the table.