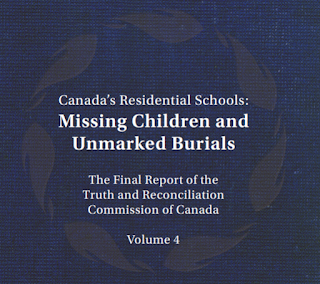 In 2015 the Final Report of the Truth and Reconciliation Commission of Canada recorded that "Death cast a long shadow over Canada’s residential schools. In her memoir of her years as a student at the Qu’Appelle, Saskatchewan, school in the early twentieth century, Louise Moine wrote of one year when tuberculosis was rampaging through the school.

There was a death every month on the girls’ side and some of the boys went also. We were always taken to see the girls who had died. The Sisters invariably had them dressed in light blue and they always looked so peaceful and angelic. We were led to believe that their souls had gone to heaven, and this would somehow lessen the grief and sadness we felt in the loss of one of our little schoolmates." These graves are not new discoveries.

"Poorly built and maintained buildings were fire traps. Nineteen boys died in the fire that destroyed the Beauval, Saskatchewan, school in 1927. Twelve children died when the Cross Lake, Manitoba, school burned down in 1930. The high death toll was partially attributable to inadequate fire escapes."

There is no question the conditions at the residential schools were bad. Some kids committed suicide and some died after they ran away. Medical treatment back then was not the same as it is today. Nevertheless, the poor conditions at the residential schools is no reason to take away everyone's civil liberty today. The Red Braid Alliance for Decolonial Socialism has an agenda. Promoting aboriginal rights is not one of them. Decolonial Socialism wants to turn everyone into slaves, native and nonnative. That is not progressive or positive.