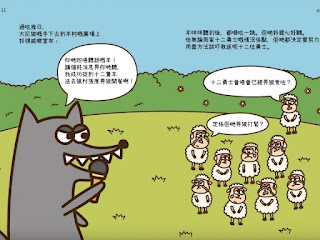 The Canadain Press is reporting that "Hong Kong police on Thursday arrested five trade union members over children's books they described as seditious, and a court denied bail for four editors and journalists held on charges of endangering national security, as part of a widening crackdown on dissent in the city. The five who were arrested are members of the General Association of Hong Kong Speech Therapists, according to local media reports."

"The association published three children’s books that Li Kwai-wah, a senior superintendent of the national security department, said have seditious intent. The books feature stories that revolve around a village of sheep that has to deal with wolves from a different village. The sheep take action like going on strike or escaping by boat, according to the synopses published on the association’s website. There was also a story about wolves who are “cruel and try to occupy the area” where the sheep live, and try to kill them, Li said."

What we are seeing here is trade unionists being put in jail for supporting trade unionism. This is exactly what I said. The Communist Manifesto says Workers of the world unite! Alexandre Soljenitsyne said that slogan was a lie because as soon as Communism takes over, the trade unions have no rights. They don't have the right to strike. That is exactly what we are now seeing in Hong Kong. Communism use trade unions to get power then betray them at the first chance.