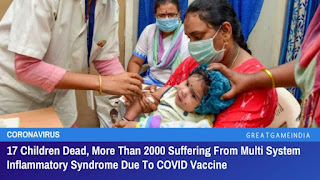 Great Game India is reporting that "Young children are becoming victims of Multi System Inflammatory Syndrome (MIS), due to the increase in the number of antibodies being made in the body from the COVID-19 vaccine which is causing damage to the immune system which is attacking other organs. Atleast 17 children have died in Jaipur and more than 2000 around India are suffering from MIS caused due to exccess antibodies from the COVID vaccine."

Peckford42 is reporting that the tragic news was reported from Jaipur, Rajasthan by Bhawani Singh for News18. "In simple terms, if the body start making more antibodies in the body, then they are saved from corona but other parts of the body are harmed. In a way, it is an outbreak of antibodies. The body’s immune system itself starts harming the body."

"Dr. Ashok Gupta, Pediatrician of Jekelon Hospital told that MIS is so dangerous that if not brought to the hospital on time, the risk of death increases. So far 17 children have died due to this. And according to the Indian Academy of Pediatrics Intensive Care, more than two thousand children across the country are suffering from MIS."

The Free Press Journal is confirming the story.