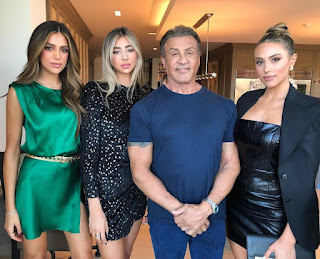 I don't care about celebrity gossip but I decided to share this because I respect Stallone. All his movies were classy. People magazine is reporting that "On Wednesday, the Rambo star, 75, shared a photo with children Sophia, 24, Sistine, 23, and Scarlet, 19 - whom he shares with wife Jennifer Flavin Stallone - singing their praises in the post's caption."

People Magazine is also reporting that " Jennifer, a co-founder of Serious Skincare, and Sly tied the knot in May 1997." Stallone also has a son, Robert Balboa Jr from his previous 26 year marage to Adriana 'Adrian' Pennino. Robert first appeared in Rocky 2. Stalone has been married to Jennifer since 1997. Tragically, his oldest son Sage, who appeared in Rocky 5, died in 2012. 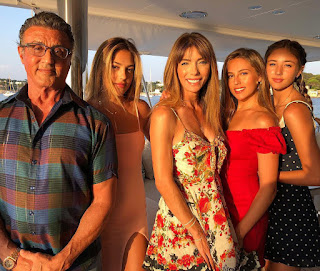 Posted by Dennis Watson at 4:11 AM