CTV is reporitng that "A man is being treated in hospital for what police describe as "potentially life-threatening injuries" following a shooting in Surrey early Monday morning. Mounties say they were called to the Patullo Bridge area after an injured man was discovered underneath. The man, who was found shortly after 1 a.m., has been taken to hospital with what appear to be gunshot wounds. The RCMP said in a news release officers believe he wasn't shot where he was found, but instead was wounded in an incident outside Brownsville Pub on Old Yale Road." 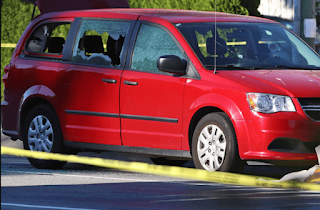 The Surrey Now Leader is reporitng that "Police are asking the public for dash cam footage after a minivan with two people inside was shot up Saturday afternoon in Newton."

"Surrey RCMP say a Dodge Caravan was at the intersection of 128th Street and 60th Avenue at about 5 p.m. when the driver of a white, newer model Audi Q5 SUV drove past it and fired “numerous” shots into the passenger side of the van. Police say the Audi continued southbound on 128th Street towards 56th Avenue after the shooting."