Military vehicles in Toronto part of the government's fight against COVID-19. WTF? Update

CTV is reporting that "The military is advising people in the Toronto area to expect a large number of its personnel and vehicles on the roads starting on Monday. The Department of National Defence says members of the Joint Task Force Central will be heading from units across Ontario to Canadian Forces Base Borden. The movement is part of the government's fight against COVID-19." AYFKM? Doug Ford is a freak! UN Armoured vehicles? That is an act of war. 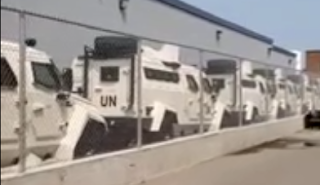 It's doesn't change the fact that stepping up the Covid response in Ontario with the military is insane. There's another Covid military installation in Hamilton in between the hospital and the jail.