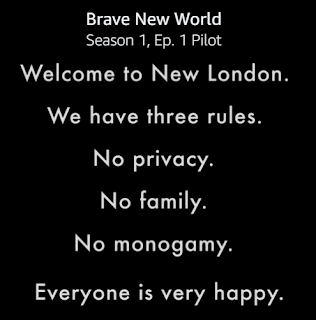 I had a peak at the beginning of the first episode of the Brave New World TV series and it is bat sh*t crazy. Don't get me wrong, it's not low budget. It has Demi Moore in it. It's a little too real - surreal perhaps. It's based on Aldous Huxley's dystopian novel.

The beginning of the pilot lays out three rules for the artificial society: No privacy, no familyy and no monogamy then declares everyone is happy. Not. They have to keep popping pills to escape the fact that they're not happy. Although it is somewhat different than George Orwell's 1984, there are some common elements. The fake happiness delusion is one. The attack on morals and the family is another. If you want to destroy a society, the fastest way to do that is to destroy the family. Homosexuality did not cause the fall of Rome, promiscuity did. It was the Caligula era.

In the beginning of the first episode, a woman gets called into the office. She's in trouble because she has been observed having sex with the same person several times. That's not allowed. It is seen as selfish because everyone belongs to everyone else. Although this delusion is not nearly as much of a threat as George Orwel's 1984, there is one common element and that is the false perception of happiness. It is frighteningly similar to the UN's fake Haplitalism.

When I was young, I studied religion and eastern philosophies. I wrote a booklet called Happiness: the essence of enlightenment. My conclusion was that true happiness comes from pursuing moral principles. When you abandon moral principles, any happiness you find is shallow and fake. It's not real. Later on I discovered a Mormon saying which states Wickedness never was happiness. That I believe to be true. Satan is not happy. His quest is to make other people miserable like he is. That's a pretty toxic quest. There is no joy to be found in it.

Nobility comes from aspiring to something higher. It comes from striving to lift others and serve them. The purpose of the martial arts is to preserve and protect. It is not to control and dominate.

The United Nations' Hapitalism is a poorly translated corny delusion with a dark agenda tied to it.