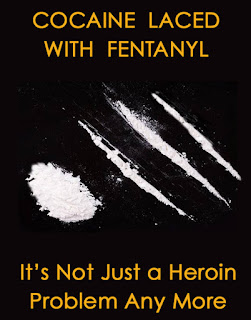 Castanet is reporting that "Interior Health is warning residents after a sample of cocaine recently tested positive for fentanyl in downtown Kelowna. On Friday, IH issued a drug alert, after a product sold as cocaine was tested at the Living Positive Resource Centre and came up positive for fentanyl. IH says there is a high risk of overdose when using any type of stimulant that contains fentanyl. The drug alert remains in effect until Aug. 6."

In 2016, a nurse bought some cocaine in Shakerz and ir turned out to be straight fentanyl. She died instantly. When the police do not arrest drug dealers that sell tainted drugs they are criminally culpable in murder. Issuing a public warning just isn't good enough. If ytu know a drug dealer is selling tainted drugs, arrest him. Until we do that, out gang enforcement is a lie.