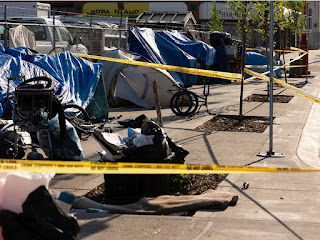 The Edmonton Journal is reporting that "A man was shot and seriously injured near downtown Tuesday morning, and police are looking for help identifying four suspects and a vehicle."

"Edmonton police were called on a weapons complaint around 99 Street and 106 Avenue just before 7:30 a.m. Tuesday outside an encampment near Hope Mission. Witnesses told police a red Chevy Camaro pulled up and there was a “verbal dispute” between multiple suspects from the vehicle and a man staying in a tent. One of the suspects then reportedly pulled out a firearm and shot the complainant, before all four individuals fled the scene in the Camaro."

Posted by Dennis Watson at 3:03 AM