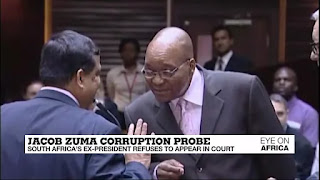 There certainly is a lot of unrest around the world and the media's misrepresentation of the events is disturbing. However, today I'm going to address the wild card: South Africa.

CTV is reporting that "Crowds clashed with police and ransacked or set ablaze shopping malls in cities across South Africa on Tuesday, with dozens of people reported killed, as grievances unleashed by the jailing of ex-president Jacob Zuma boiled over into the worst violence in years."

"Protests that followed Zuma's arrest last week for failing to appear at a corruption inquiry have widened into looting and an outpouring of general anger over the hardship and inequality that persist 27 years after the end of apartheid. Poverty has been exacerbated by severe social and economic restrictions aimed at blocking the spread of COVID-19."

So here we see Covid 19 creates poverty and economic hardships and rioting results. Mission accomplished. After all, that is the purpose of the Covid reset. Clearly the free market is not the problem banning it is. "Zuma's foundation said there would be no peace in South Africa until the former president was released from jail."

So Jacob Zuma was a member of the ANC as was Nelson Mandella and the current president.

"In a separate matter, Zuma is standing trial on charges of corruption related to a 1999 arms deal, where he allegedly received bribes from French arms manufacturer Thales. His financial adviser has already been convicted and imprisoned in that case."

"While human rights groups in South Africa welcomed Zuma's imprisonment, many people in KwaZulu-Natal, the center of support for the former president, said they were not happy about it."

"Another Pietermaritzburg resident, Ntuthuko Mdletshe, said she felt Zuma had been treated unfairly because South Africa has many other corrupt politicians who have not been arrested."

Maybe that's not worth burning the country down over. Any leader who asks his people to burn their country down so he doesn't have to go to jail, in not someone I would follow.

This is what large corporations like SNC - Lavalin and Lockheed Martin do all the time. They get billion-dollar government contracts paid for by the taxpayer and give the dirty politicians a kickback in the form of campaign contributions.

The former French president Sarkozy did the same thing in Pakistan only far worse. He got a kickback on the sale of a French sub then launched a false flag terrorist attack when the kickbacks were cut off. That was known as the Karachi affair.

So Sarkozy and the French company gets off but Zumba is charged. I get it. Justin Trudeau did worse too. The We Scandal, SNC-Lavalin and his involvement with the CCP mean he should be in jail. Yet the media spins for him because they too get kickbacks. However, rioting because you don't want a corrupt politician to go to jail looks pretty strange to the rest of the world.