Mark Zuckerberg rises above the trolls 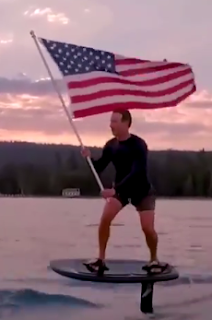 This one is indeed bizarre. ET Canada is reporting that "The Internet Reacts As Mark Zuckerberg Shares Bizarre Video Of Himself Riding An Electric Surfboard While Waving The U.S. Flag." The video he posted isn't bizarre, their reaction to it is.

Obviously, everyone hates and is leaving Facebook because Zuckerberg hopped into bed with the Communist Party of China and let them fund his fake fact checkers. The ANTIFA trolls seem upset he is waving the American flag on Independence Day. Why wouldn't he? How is this news?

I'm not sure the video is real but the hydrofoil surfboard looks cool. Waving the flag while on one takes a certain amount of agility and fitness. Not something you would normally expect from a pencil neck bureaucrat. The troll sh*t simply reinforces the MSM's obsession with teaching kids to hate America. Go f*ck yourself. Anyone who listens to those trolls is stupid.