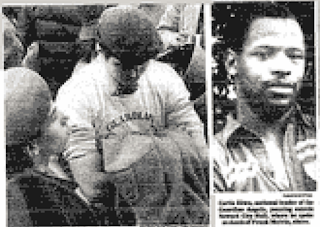 This is a story that needs to be told because it's true. It relates to Curtis Sliwa's support for diversity and police integrity. When I was in New York, I didn't spend much time with Curtis. I spent a lot of time with people he had trained and heard from them what Curtis was really like. Curtis had put a black man named Thomas (Tut) Hunt in charge of the New York City chapter.

They called Tut the New York City secret weapon. He was astounding - smart, fit, lean, agile and fearless. The stories I could tell. I read the news clippings and heard from Tut about the Frankie Melvin story. Frankie Melvin was a Guardian Angel in New Jersey, just outside of New York.

He was shot dead by a Newark Police officer Dec. 29th 1981. The Guardian Angels were on the scene. When the police arrived, Frankie opened his jacket so the police could see his colours and the police shot him dead. Curtis came unglued. He was relentless in the press calling it out as murder. The police's version of the event contradicted the known facts.

At first the police claimed he was shot by a cop on a rooftop. Curtis pointed out that was not true. Curtis said Frankie was shot by a white cop and the police tried to blame it on a Hispanic cop. Tut said the Newark police at the time were known for racism just like the LAPD.

Curtis led a march to Washington demanding justice. He took a lot of slack for his bold stance. They threatened to sue him for slander and made him read out an apology. After he read the apology on live television, he tore it up and said if you believe that you're crazy. This was murder and we will not stop until we find justice for Frankie Melvin and his family.

Although Curtis clearly supports law an order, he also supports police integrity. We don't need more police investigating the police and I'll tell you why. Watch the documentary the Seven Five. It's about police corruption in Brooklyn prior to the New York Model.

Michael Dowd was a dirty cop from the 75th precinct in Brooklyn. He was arrested in 1992. The documentary is a scathing tell all tell after he got out of prison. He was helping the drug dealers evade capture. In the documentary he boldly declared that he had no fear of getting caught because he knew the other police officers had his back no matter what.

This is why we don't need the police investigating the police. We need a third party we can trust. Someone like Curtis. When I came back to New York the second time, Curtis had promoted Tut to Regional coordinator and sent him to lead a crack down on crack campaign in Florida West Palm Beach with Paul Martinelli. While Tut was away, Curtis put a Latino named Fox in charge of the New York City chapter. I worked closely with Fox. He was another strong leader of great stature.

When it comes to promoting diversity and police integrity, Curtis Sliwa walks the walk. He doesn't just talk the talk. Actions speak louder than words and Curtis' actions speak for themselves.