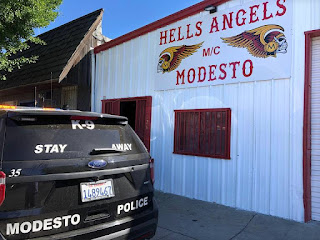 "According to court documents, Shafer was the Vice President of the Hells Angels Motorcycle Club in Modesto in 2019. As part of a years-long investigation into the Hells Angels Motorcycle Club, investigators obtained a court-authorized wiretap for Shafer’s phone. The wiretapped calls and messages showed that Shafer was conspiring to distribute marijuana and heroin. Specifically, in April 2019, Shafer conspired with a former Hells Angels member who was incarcerated in Pleasant Valley State Prison to smuggle heroin into prison."

"Shafer is scheduled to be sentenced by U.S. District Judge Dale A. Drozd on Oct. 22. Shafer faces a maximum statutory penalty of 40 years in prison, a mandatory minimum sentence of five years in prison, and a $5 million fine."