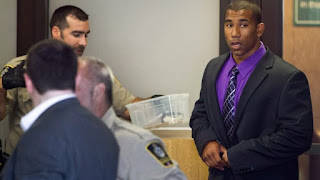 Keith Fraser also reported that Former BC Lions general manager and head coach Wally Buono testified at the trial in February. Wally testified that Kimberly Hallgarth contacted the team during the offseason in 2008. He said she was upset about the fact that Josh had allegedly damaged her car and she wanted them to make sure he paid for the damages.”

"Hallgarth later sent some photos of the damaged Range Rover, including a picture of a smashed windshield, as well as one or two photos of injuries she claimed to have suffered after being assaulted by Boden, said Buono. Those injuries, which were obviously depicting domestic violence, included a bruise on her forearm and the side of her face, he said."

This is where it gets bizarre. The crown's initial theory was that Boden killed his ex because he blamed her for losing his football career. First of all, if he lost his job because he assaulted her, that's his fault not hers. However, it gets much worse. The article is somewhat astounding.

Another former girlfriend testified that she witnessed the fatal assault. The other former GF admitted that she was working as a sex trade worker for Boden and that he assaulted her and accused her of working for another man. Not of having sex with another man, he was pimping her out. He accused her of working for another pimp.

Kimberly was upset about the damages to her Range Rover. How can she afford a Range Rover? She is his ex. Canadian football players don't make much money. It's not like the NFL or the NBA in the States. Nissen said she was told that Hallgarth also worked as a sex-trade worker for Boden. Nissen said “I’ve definitely learned a lot about the cycle of abuse. It helps me realize what the relationships was with Josh. It wasn’t love, it was a cycle of abuse.” Ya think?!

We need to stop right here for a monument because this is bat sh*t crazy. Ladies: if a man asks you to have sex with another man, he does not love you and never will. Men: living off the avails is not noble. Get a f*cking job. This is where we need to call in Dr Phil because this sh*t be cray.

This brings us back to Sonny Barger and Lenny the Pimp. What Sonny Barger did to Margo Compton and her twin daughters was deranged. Anyone who thinks that's cool needs therapy. There used to be a TV series called pimp my ride. Back then pimping meant cool. It didn't mean living off the avails. Snoop Dog had a funny song about being a PIMP. It was a joke. It wasn't real. Terms like pimp slapping aren't funny. F*ck #MeToo. I'm talking about reality.

Men, picture this. You die and you're standing on top of a large mountain where everyone in the world can see you and can see everything you've done in your life. You come face to face with yourself. You see the man you are, the man you were and the man you could have become. Should have could have would have but didn't. Pimping out your girlfriend or the mother of your children is Clifford Olsen. It's really f*cked up. It shows that you have absolutely no self-respect.