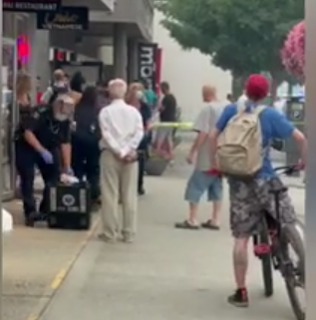 Castanet is reporting that "RCMP have cordoned off a section of Pandosy Street after a brazen shooting on a busy roadway. Witnesses say gunfire rang out just before 7 p.m. while restaurants in the area were at the peak of their Saturday night dinner rush. Details are scarce at this point and police have yet to comment, but initial reports from bystanders are that two men were hit. Video shows one of them being loaded into an ambulance. Witnesses say they heard between five and seven gun shots." Daytime shooting on a busy street. Bizarre.

City News is reporitng that "Kelowna RCMP have confirmed two people were injured Saturday night in an apparent targeted shooting. Just before 7:00 p.m., Kelowna RCMP received reports of shots being fired in the area of Pandosy Street and KLO Road. When officers arrived, they saw two adult males suffering from apparent gunshot wounds. The two men were then transported to hospital." The Vernon Morning Star refers to the shooting as targeted.

In March Kyle Gianis was shot in the leg outside a Kelowna gym 12:30 in the afternoon. Five days prior to the shooting his house was raided and torn apart by the compromised CFSEU executing a search warrant. Kyle told Global that they took his phone and his car for no reason.

The compromised CFSEU told Global they were in the process of preparing a disclosure package for Crown counsel seeking charges in relation to that investigation. In the process of. So they had no right to seize his car and phone. The CFSEU are shady. They work for the Cub Pack.

Arnie Miller was an ex cop turned pimp that sold drugs to his service providers at the Garden of Eden in Kelowna. The CFSEU never touched him because they received discounts at that facility just like at the Swedish Touch above Brandi's. They never investigated Brandi's murder either. 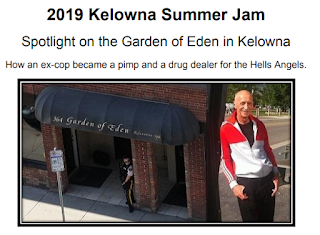