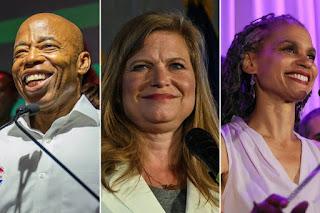 The Communist News Network claims that "Former Trump attorney Sidney Powell and her legal team clashed repeatedly with a federal judge Monday during a hearing to determine if sanctions are warranted against her and other attorneys who filed a lawsuit in Michigan based on false claims of election fraud in an unsuccessful attempt to overturn the results of the 2020 election."

Three Democrats "have requested that Federal Judge Linda V. Parker (who was appointed by Obama) sanction Powell, attorney Lin Wood, and other members of the legal team that were involved in the efforts to have Michigan's presidential election returns decertified due to unsubstantiated claims of voting irregularities... it never should have been filed," Fink said. "These lawyers should be punished for their behavior."

They should be punished for filing a lawsuit? Oh really? That sounds more like Communist China who punish human rights lawyers. Meanwhile, back in New York City, three Democrat candcates for mayor each filed a lawsuit to challenge the NYC mayoral Democrat Primary​.

The New York Daily News reported that "Following the New York City Board of Elections ballot bungle, mayoral candidate Maya Wiley filed a lawsuit on Thursday night aimed at preserving her right to a recount in the city’s Democratic primary."

"Wiley, a former counsel to Mayor de Blasio, submitted the court papers ahead of a Friday deadline to file such a suit after the June 22 primary, which remains unsettled due to a long wait for the tallying of absentee ballots."

"The eight-page complaint, which was filed in Kings County Supreme Court, said the intention of the litigation is to preserve the right 'to correct errors that have occurred, are occurring, or may occur' in the recording of election results."