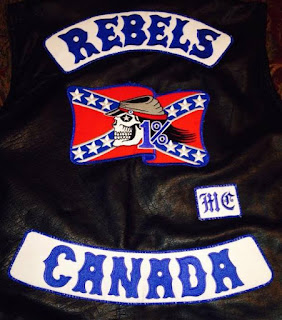 The Canadain Press is reporting that "Cranbrook Mounties broke up a fight on Friday between rival outlaw motorcycle gangs from Alberta that ended with several people to hospital. RCMP say they were called about the fight at a gas station early Friday evening, and officers flooded the area and separated the two groups. Police say that shortly after, the local hospital reported five people showed up with what appeared to be stab wounds."

The Calgary Herald interviewed a witness who said, "I don’t know what it was about or what it was over. The cops came afterwards but it looked like 30 Rebels and probably 15 (Hells Angels)."

CBC reported that "Police separated the two groups, RCMP said in a release, and determined they were rival motorcycle gangs from Alberta who were passing through the B.C. city. An RCMP spokesperson told CBC it's believed the two groups were the Hells Angels and the Rebels, but could not immediately provide more information as to where in Alberta the groups were from."

The Confederate flag represents slavery. That's not going to fly in BC. Just sayn.

Like I said, people who ride in BC don't like troublemakers. It's time to turn the page.