When the Rebel Yells 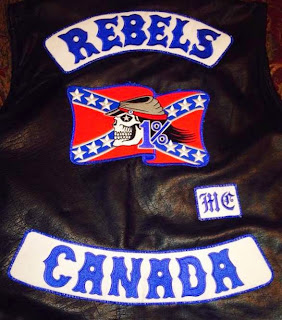 Last month the Vancouver Province printed an article about the rumours surrounding the Rock Machine coming to Vancouver. Although some claimed it was just some kid calling in to the paper making stuff up, the article quotes a Vancouver cop who claimed Rock Machine colours have been seen in the Lower mainland.

Shortly after that article came out the Toronto Sun printed an article where police in Montreal claimed they found a warehouse with Rock Machine colours in it. Although the Rock Machine was founded in Quebec and raged a long war with the Hells Angels there over drug turf, they had been extinct in Quebec for almost a decade.

We know that the new Rock Machine is in Ontario and Winnipeg and has expanded to Australia. Well now we are hearing rumours about the Rebels from Australia coming to Canada and setting up shop in Toronto. There are even rumours of them trying to set up shop here in BC. I want to be clear that the purpose of my blog and web site is not to advertize for aspiring gangs or gang members to promote their cause and help them build a reputation for their business. This as all rapidly becoming one toxic cess pool of crime and mid life crises. 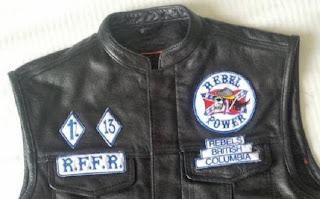 Obviously the Rock Machine are enemies of the Hells Angels and are affiliated with the Outlaws who have coined the phrase ADIOS (Angels Die in Outlaw States). Seemingly the Rebels from Australia are also enemies of the Hells Angels and are fighting with them in Asia. Evidently, the Rock Machine and the Rebels had some kind of war going on in Australia making everything one big toxic mess.

To make matters worse, last year one chapter of the Rock Machine in Australia patched over to the Bandidios. This was after the Rock Machine's assimilation with the Bandidions in Canada failed and they went back on their own. More complicated still, the Finks who fought with the Hells Angels and refused to join them after they got the woman beater Chris Hudson to defect, have now patched over to the Bandidos.

One of the things that drive me crazy is this ridiculous saying AFFA. Angels Forever Forever Angels. All the puppets and enemies copy the same phrase. It's stupid when the Hells Angels say it and even more ridiculous when a puppet says it knowing full well all the puppets are desperately striving to one day become a real boy just like Pinocchio of old and trade in that puppet patch for what they perceive to be a real boy patch making their forever very short term indeed. Forever is forever until they trade it in or get kicked out and screwed over.

We also know that the Warlocks, another enemy of the Hells Angels have set up shop in Fort McMurray and Drayton Valley outside Edmonton. There are even rumours of them wanting to come to BC and set up shop in Salmon Arm. OK so hold the door. The enemy of my enemy is not necessarily my friend. No offense but the Warlocks are just more aspiring criminals who are no better than the Hells Angels just not as well organized. Bragging about a lockdown page where their members have been convicted of criminal offenses is absolutely ridiculous.

I will say a word about logos. Back in Belfast, the Provisional IRA used to use a Phoenix as a logo. The graffiti I saw there was of a brown bird that looked similar to an eagle rising from the ashes. However, I can only find green ones online. The Warlocks also use a Phoenix only theirs is yellow and looks like something out of Harry Potter. No offense. It's a free country but that's not the kind of logo that I would be proud to wear nor does it tend to send fear into the hearts of their enemies. It kind of makes me think of Harry Potter and Dumbledore when I see it.

I do like the Rock Machine logo. I don't support them selling crack but I do like their logo. An eagle's head is way better then a helmeted skull with devil horns that looks like something out of the lord of the flies. I also like the Outlaws logo. I usually can't stand the over use of the skull in logos but a simple skull with V twin pistons is fine and comes in second to the RM logo in my opinion. In third comes Michael McCrea's Highlanders MC in Cape Breton. I like claymores.

So here's the deal. I have beef with the Hells Angels monopoly of the drug trade in BC and of the sex trade. If you say you want a revolution and you want to rage against the big red machine, I am totally down with that. But if you want to sell crack or pimp crack hos and wear a 1% f*ck up patch then you can count me out. When that rebel yells you're on your own. I will not support it. Instead, my guitar will gently weep.