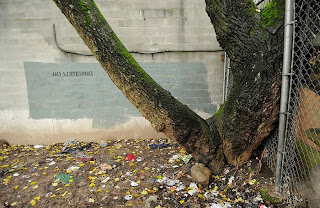 Speaking of violence against drug addicts and sex trade workers, who is Larry Robert Mizen? He has quite the criminal record. In 2006 the Vancouver Province reported that "Larry Robert Mizen, 45, of Surrey has been charged with forcible confinement, extortion, robbery, assault, assault with a weapon, sexual assault, weapons possession and uttering threats against sex-trade workers, street-level criminals and drug addicts in North Surrey. Further charges are expected."

There was a court case in 2005 that talked about some of the allegations against him. He often has a female co accused. Once again this is someone who has a long record for using violence to collect drug debts in Surrey outside the Front Room. I guess as long as he doesn't smoke a joint on Wreck beach, that's OK. The predatory drug dealers are still outside the Front Room.

Don't worry. They'll send a bike patrol a mile down the road from Newton where it's safe. Just as long as the public sees a bike patrol Bill Fordy will be happy. No one actually wants to have a police presence in a high crime area to disrupt the crack trade. That would mess up everything.

Posted by Dennis Watson at 1:30 AM