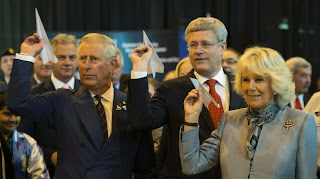 I see Prince Charles and Camilla were in Halifax last week. I wasn't going to say anything about it because royal visits for me personally are a non issue. I'm sure someone in Halifax would like to visit them just like I'm sure someone in Victoria would like to see them as well. For the rest of us it's pretty much a non issue. I'm not anti the royal family I'm just not into it.

I personally like Charles. He did as he was told and married Dianna which was the best thing that ever happened to the royal family yet things didn't really work out. She was a lot younger than him and he rather be with someone his own age and not so brilliantly beautiful. Him marrying Camilla in the end kinda shows his character. He's not a dirty old man he is a man of dignity and self respect.

However, his recent statement comparing Putin to Hitler over their annexation of Crimea in the Ukraine has got me shaking my head. Does he really think we're that stupid or is he just pulling a Vic Toews and repeating something he was told without thinking about it or actually looking at the voter count last election. Over 70% of the voters in Crimea voted for a pro Russian president in 2010. Over 70%. How much over 70% we don't know but we do know it was over 70%. Enough to help a pro Russian president get elected that election over all.

Letting an unelected coup steam roll over the democratic will of those voters and forcing them to join the EU would be much more of an act of Hitler than Putin protecting them from that coup and annexing them from it. We've talked a fair bit about the conflict in the Ukraine. It's pretty clear the West of the Ukraine don't want to join Russia and the East of Ukraine doesn't want to join with the EU. That's pretty clear from the voter polls in the 2010 election.

What concerns me is the blind nonsense that doesn't make sense. It makes me wonder who's feeding him that kind of BS MI-6? We need to ask MI-6 what British Agents were doing in Iraq dressed as Arabs with a car load of guns and explosives. We need to ask them why they shot at local police the allies put in place at a roadblock and refused to tell them what their secret missions dressed as Arabs was. Instead of revealing that sinister mission England leveled the prison that was holding them and helped them escape without a trial or an explanation.

There are a lot of things MI-6 does that need explanation. God save the Queen and the future Kings. Charles and William both. God save them from the lies of MI-6.

Just for the record, Communist China is a much bigger threat to civil liberty than Russia and no one seems to have a problem with Communist China. They have launched a new campaign to demolish churches there. It's hard to conceive that kind of communism can still exist in our modern world. Telling someone they aren't allowed to be Christian or Jewish or Muslim. It is bizarre. That is not a free republic.

This is why China should not have our oil rights. We should not be funding their military expansion and their destruction of civil liberty every time we get gouged at the gas pumps.

As for the Ukraine, here's a link a blog reader just sent in:

Posted by Dennis Watson at 7:54 AM