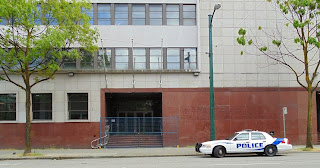 In another thread I asked why there was a big metal fence blocking the public access to the police station in the DTES at 312 Main street. One reader called me stupid for not knowing the police station had moved. I was not aware it moved. Yesterday I went to check it out myself. 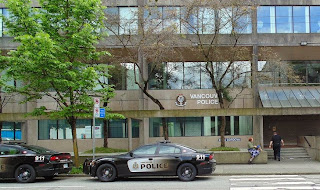 The Main street police station is still there right beside the courthouse. It's in a perfect location. There are still tons of police there that use the facility. Only it's closed to public access. Even the East Cordova street entrance. 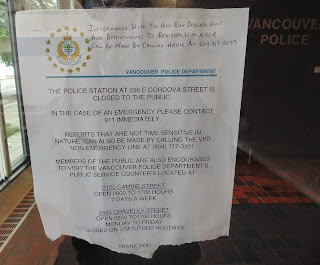 I asked one police officer what the status of the police station was. He certainly wasn't friendly. They sure don't like talking to anyone with a camera down there. I told him I had heard the police station had moved but I notice a lot of police still there. He said the station was split. I see. There is no doubt a need for the police to use that facility.

My only concern is the whole concept of closing it to public access. I don't see how that helps protect the people living in the DTES from violence. A few years ago I spoke with one woman who lived in the DTES. She said that if she was being aggressively threatened, she would run over to the front of the Main street police station. She said because they have cameras out front it was a safe place to go if you were being harassed. Now that small amount of safety for the residents of the DTES has been taken away. They are left to fend for themselves.

I am somewhat concerned about the amount of money that gets spent on helping the people in the DTES and how they never get to see it. So many people and agencies exploit the people living in the DTES it's not funny. They get harassed and brutalized by the drug dealers and thieves while the police just abandon them. The city gives them a free crack kick and says fend for yourself. Get medicated and forget about it. That is not a solution to the violence in the DTES.

All this money on a new state of the art police station on Graveley street and all this money on a fleet of band new expensive police cars while the police turn around and abandon the people who live in the DTES completely. That is not right. The police say well they don't want us there they hate us. That's not entirely true. The drug dealers and thieves don't want them there. The addicts want the police to protect them not give them the boots. It really is that simple. 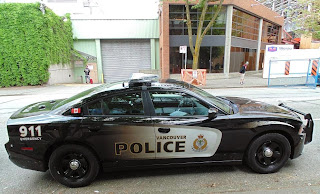 Of course this policy is from city hall not the police. No doubt individual officers feel frustrated. They had a guy writing a blog about walking the beat in east Van but they ended up pulling the plug on that campaign as well since Mayor Robertson just cares about the city's image like every other politician. At first the police were concerned about closing the station down at night to suppress crime statistics. Now the city has closed the whole thing to the public entirely. This is not progressive. It doesn't help stop the violence against sex trade workers or anyone else there.

The Main street police station is within eyesight of the open drug market at the Carnegie centre. I walked around the block yesterday and saw some street venders on the East Hastings side of the building. One guy had a huge open wound on his face from being recently brutalized. Another guy selling stuff had several rocks of crack in his hand that someone else was picking from after paying him for them. Open crack deals in plain view. That is what needs to stop. 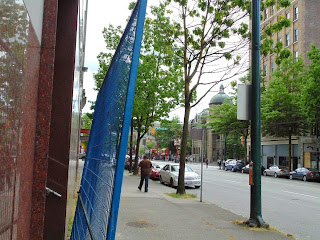 Arresting the crack dealers not the addicts would be an amazing thing outside the Carnegie centre. Addressing the crack plague is no doubt a daunting task but like everything all it takes for evil to triumph is for good men and women to remain silent and do nothing. We can't do everything but we can do something. We are morally obligated to try. We are also morally obligated to stop the brutal violence that victimizes the residents of the DTES on a daily basis. The DTES has been one colossal failed social experiment. It's time to try something new.

You must empty your cup to taste my cup of tea.