Stephen Harper vs the Supreme Court of Canada 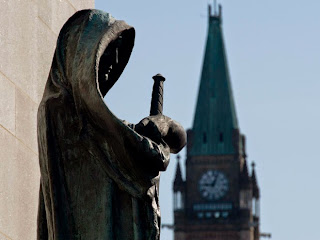 Stephen Harper has launched an interesting mud slinging campaign of Supreme Court Chief Justice Beverley McLachlin. The concern appears to be about Harper's desire to appoint Marc Nadon to the Supreme Court. Beverley McLachlin expressed a concern about his eligibility and Harper goes off on a tirade about how it's inappropriate for her to lobby the government about appointments.

CBC quoted Adam Dodek who said "Every minister of justice in this Conservative government and in its predecessor Liberal governments going back at least 15 years has stated publicly that they have consulted with the chief justice of Canada about appointments to the Supreme Court of Canada. So where is the issue and where is the problem here?"

By a 6-1 margin, the Court found that he did not meet the requirement of s. 6 of the Supreme Court Act, which requires that Quebec appointments to the Court be either a sitting judge on the Quebec Court of Appeal or Superior Court, or a current member of the Barreau du Québec. As a result, the Court ruled that his appointment had never taken effect and he remained a supernumerary judge of the Federal Court of Appeal."

Harper ignored a legal caution from Canada's chief justice on Marc Nadon's eligibility and proceeded unilaterally. He has now launched a character assassination of her in retaliation. I'll admit that I didn't understand the beef at first. Quebec, BC. Nova Scotia, it doesn't matter where someone is from. A lawyer is a lawyer a judge is a judge and the elected government appoints judges.

The National Post clarifies the concern by stating that Justice Nadon sat on the Federal Court of Appeal, not a Quebec court. The Supreme Court of Canada Act requires at least three judges be “appointed from among the judges of the Court of Appeal or of the Superior Court of the Province of Quebec or from among the advocates of that Province.” A key reason is to ensure expertise in Quebec’s civil code, which differs from the common law in other provinces. Mr. Justice Nadon is to be the third Quebec justice, after the retirement of Mr. Justice Morris Fish, but the Federal Court of Appeal is not a Quebec court, even if a Quebecer sits on it.

The Globe and Mail confirms that Justice Nadon was (and remains) a judge on the Federal Court of Appeal. No Federal Court judge had ever filled one of the three spots on the court reserved for Quebec judges.

So clearly Marc Nadonm can become a Supreme Court Judge. He just can't fill one of the three positions reserved for Judges with experience in Quebec civil law. It's that simple.

It's obvious on some appointments there are underlining concerns of political affiliations just like with the Senate appointments. For example, the right wants to appoint judges who oppose abortion and the left want to appoint judges who are pro abortion. That's just one example. Judges are supposed to be impartial and interpret the law but we know that's a fallacy in the real world since judges are human beings and have their own independent political opinions. Conservatives appoint their judges, Liberals appoint their judges and so forth. Beverley McLachlin was appointed by Jean Chretien while Marc Nadon was originally appointed by Brian Mulroney, hence the conflict.

We all know that Stephen Harper is an enemy of the Charter of Rights. He admits he hates it and wants to get rid of it because it restricts his quest for absolute power. Opposing that quest and upholding the civil liberty protected in the Charter of Rights is clearly a good thing. 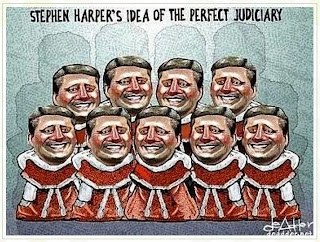 Upholding civil liberty and the Charter of Rights is a good thing. Yet it is clear that the court can easily overstep those boundaries and become a law unto themselves which is not in the public interest. Every civil servant need to be publicly accountable. It is wrong for the Supreme Court to make their own laws contrary to the democratic will of the people who pay their wages.