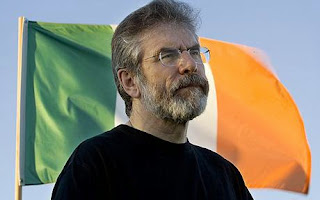 Gerry Adams is in the news both locally and internationally. He was arrested on suspicion of ordering the 1972 killing of Jean McConville, a mother of 10 in West Belfast.

Jean McConville was seized by the IRA from her Divis Flats home in West Belfast, shot dead and secretly buried. Her body was found in 2003 on a Co Louth beach. The IRA thought she was a spy for the British so they executed her. She was a widow and the mother of ten children. Her husband had died of cancer and the children were separated and raised as orphans. It is without question a tragic event. I hesitate to comment on the case but since everyone knows of my love for the Holy Land (Ireland) and since my hecklers will no doubt use this case to trash me I will address it now.

There are a lot of things that the IRA did that I don't agree with. However, there are a lot of things they did that I do agree with. The Easter Rising and the Irish Proclamation was an inspired rebellion against foreign occupation. The founding fathers of that sacred proclamation said: "We place the cause of the Irish Republic under the protection of the Most High God. Whose blessing we invoke upon our arms, and we pray that no one who serves that cause will dishonour it by cowardice, in humanity, or rapine."

When I first visited Ireland many years ago, the IRA had kidnapped a dentist in Dublin and sent his fingers to his family with the ransom note. That was horrible. I did not agree with that. It was an example of inhumanity and rapine. Yet the quest for liberty is a noble cause. The movie Michael Collins with Liam Neeson sets the stage for the struggle that existed in that time period.

In launching their struggle against foreign occupation the provisional government needed to address the problem of informants. British spies who would pass on information to the invading army resulting in the murder of local revolutionaries. To combat this problem they initiated the practice of executing informants for treason. Treason is without question a serious offense. Executions without a trial is however, very problematic.

Was Jean McConville an informant that spied for the British? I don't know. I personally doubt it. Yet I don't doubt it because a British tabloid said there was no evidence she was a spy. I doubt it because if she was Irish and lived in the Divis Flats in West Belfast, I find it very hard to believe she felt any sympathy for the British invasion whatsoever. No one there does. I used to ride the black taxis down the Falls road to Divis flats in the late /80's.

I realize the family needs closure and will never find such because no truth will replace what was taken from them. Right or wrong it appears that the IRA executed their mother for being a spy. Whether or not she really was a spy is very difficult to ascertain. Yet we know who killed her and why. I'm not sure how trying to blame one specific person for that murder now will help with the healing process. When something as tragic as that happens, there is no justice.

I am somewhat surprised the police want to press charges at this point. I thought there was an amnesty granted since the cease fire and the peace talks from 1998, when the Good Friday peace accord was signed. Both sides murdered many people in that political war. The IRA, the UDA and the British Army. I was never a big fan of Gerry Adams. I had no problem with him. I was a fan of Bobby Sands. He was the activist who died for his beliefs. Gerry Adams was more of a politician. When Bobby Sands and the hunger strikers of H block were dying, Gery Adams was sitting at home in his office. Someone had to be the political voice.

I was in West Belfast when the crazed lunatic from the UVF, a branch of the UDA, showed up at an IRA funeral in Milltown cemetery and started throwing hand grenades into the crowd, then opened fire on the crowd with a hand gun as he tried to flee the scene. I was told not to attend that funeral but I had a friend who did. He was one of the youth that took fire and chased the gunman down giving him the boots until a British Helicopter came down and saved him.

Years later after word of a cease fire and a peace process many political prisoners were released as a sign of good faith. That's why I'm rather surprised they want to go backwards and arrest Gerry Adams for something that happened before the cease fire and the peace process. To me it doesn't seem to be bargaining in good faith. No disrespect to the genuine loss of the McConville family. It's just that even the Miltown bomber was released from prison as part of the cease fire.

To Jean McConville's children I say I am truly sorry for your loss. Nothing can replace what was taken from you. Yet as God lives, life does not end at death. You will see your mother and your father again. Your day will come. Blessed are they that mourn for they shall be comforted. Remember, Blessed are the peacemakers for they shall be called children of God. Many people were murdered in that war. We need to remember them, we need to honour them and we need to move forward to create a climate of peace so more innocent people don't suffer like you have.

The Irish Flag is an ensign for peace. It's called the tricolour. Green is for Irish Catholic. Orange is for the Irish Protestants and White represents peace between the two. When hate driven "loyalists" burn that flag and shout Ulster Say No to peace in Ireland, they are teaching their children to hate and as Martin Luther King declared hate is too great a burden to bear. Mistakes were made on both sides. "What's done is done, what's won is won and what's lost is lost and gone forever. All we can do is hope and pray for a bright brand new day in the town that I loved so well." Peace.