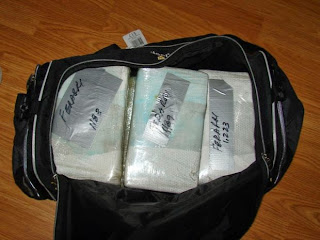 The US Attorney's office in New York is reporting that Alessandro Taloni, an alleged associate of the Montreal-based Rizzuto organized crime family of La Cosa Nostra, was sentenced to 10 years in prison, to be followed by 5 years of supervised release. In May 2013, Taloni pled guilty to cocaine trafficking charges contained in a superseding indictment returned on April 3, 2013. As part of his sentence, Taloni will also forfeit $2,663,191 that federal agents seized from multiple locations in California that Taloni used to store narcotics and drug proceeds.

Taloni and ten members of a Montreal-based drug distribution organization affiliated with the Rizzuto and Bonanno crime families, the Hells Angels, and the Sinaloa Cartel were charged with narcotics and money laundering offenses in connection with trafficking over $1 billion worth of marijuana, cocaine, and ecstasy into the United States between 1998 and 2012. The organization transported tens of thousands of pounds of marijuana from outdoor growers in British Colombia (most of BC Bud is grown indoors) to Montreal, Canada, and controlled numerous warehouses in and around Montreal for the manufacture of ecstasy and hydroponic marijuana.

The drugs were smuggled into the United States using transportation networks run by the Hells Angels and Native American co-conspirators from the Akwesasne Mohawk Reservation along the U.S./Canadian border. Once the drugs were sold in the United States, much of it by distributors tied to the Bonanno crime family in New York, the organization used millions of dollars in drug proceeds to purchase more cocaine from the powerful Sinaloa Cartel in Mexico for exportation to and distribution in Canada. Taloni was personally sent from Montreal to Los Angeles, California, to receive those drug proceeds and to purchase cocaine from the Mexican sources and export cocaine to Canada.

The New York Daily News is reporting that Taloni included Pope Benedict XVI’s blessing in court papers begging the Brooklyn judge for mercy. Defense lawyer Gerard Marrone referred to the “official blessing from the Vatican” in court papers, but did not raise the Papal prayer in court.

Evidently this is the same ring Larry Amero was charged in out of Montreal. Trading BC bud for cocaine to be sold here as crack. The greed continues. Jimmy “Cosmo the Clown” Cournoyer was the Hells Angel fall guy and was sentenced to 20 years after he plead guilty May 2013 to supplying BC Bud to the big apple. Gee I wonder if Randy Jones was tied to the BC end? No doubt Hal was.

The National Post reported that authorities said Taloni was arrested not long after delivering $188,000 to an undercover DEA agent, who was participating in an investigation into the drug ring "kingin" (fall guy) Jimmy Cournoyer. Larry Amero was busted in Montreal for his involvement in this ring November 2012. Cosmo was arrested Feb. 16, 2012. Larry went to Montreal after he was shot in Kelowna August 2011.