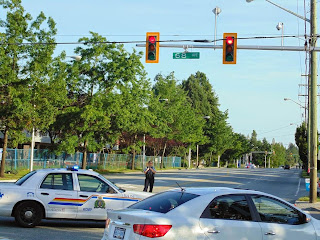 Scan BC is reporting that #Surrey #RCMP have closed 152 St & 64 Ave after two vehicles were seen shooting at each other. Both vehicles fled scene. The car on scene behind the police tape must be a witness. One resident claimed their neighbour heard three shots fired. Two other witnesses on the scene seem to think the incident started at King George and 32nd Ave. That's where they heard two cars skid and get in an accident who were then chased by the police. There is no evidence confirming the two incidents are connected. However, the front bumper of the vehicle in the scene was damaged. 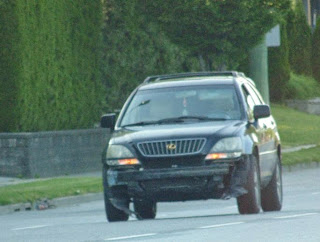 Strangely enough, right when I thought they were going to start dropping police tape and letting traffic through more police kept showing up and started diverting traffic off of 152nd Street before 68th Ave right into a suburb maze resulting in a traffic nightmare. I have no idea why they would expand the crime scene and create a circus side show for traffic when the scene is clearly safe. The shooters have left the scene. 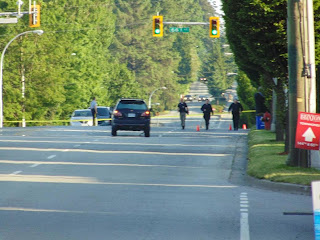 One resident tried to cross 152nd Street to get home and a cop freaked on him and made him wait for the insane amount of time the extended crime scene was up. All the guy wanted to do was cross the street and go home. Nowhere near the actual crime scene. He lived on the same street the same cop just let a car exit from and turn south on 152nd. That kind of bizarre authoritarianism just alienates them further from the public. My response is simple. When are they going to start arresting crack dealers in Newton? You think that is not related to this? I beg to differ.

May 13th the Surrey Now reported that a man was shot dead in Cloverdale around midnight at residence in the 17400-block 57th Avenue. Insp. Tim Shields was the RCMP spokesman on that file. The same person charged in a sexual harassment suit that Bob Paulson promised to do something about. Not. The only thing they are doing is harassing whistleblowers and promoting people accused of sexual harassment.

Update: There was another shooting in Surrey Saturday. News1130 is reporting that Police in Surrey are trying to figure out who fired shots from a moving car on 152nd between 64th and 72nd Avenue Saturday night. That's just down 152nd from the shooting earlier that day.