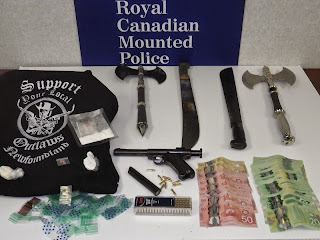 The RCMP are reporting that on May 25th, 2014, after executing a search warrant in Gander, Newfoundland the police seized a loaded .22 calibre handgun, cocaine, LSD and marihuana. It looks like just trace amount of drugs and that pistol looks like a pea shooter but the axes and machetes are pretty nasty. Interesting to note the Outlaws MC support shirt also seized in the raid. Nicholas Sheppard was arrested and is facing nine charges. LSD? That's kind of retro.