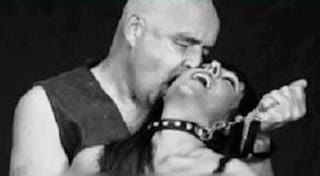 Speaking of off duty police officers attending parties at Piggy's Palace, I understand Jim Brown's disciplinary hearing is in the beginning of June. We are told it's supposed to be open to the public but no one is letting us know when or where it is so I doubt that the public will be allowed in. Especially since the RCMP have gone to such bizarre effort to cover up his criminal fantasies. It's hard to maintain public trust when they cover for a guy like that.

No doubt Jim Brown's disciplinary hearing is going to be a complete scam just like the Missing Woman's Inquiry was. The police already investigated him and claimed “[RCMP] Legal Services deemed this to be off duty, non-criminal, adult consensual activity during which the individual was not representing himself as a member of the RCMP and thus did not appear to them to meet the threshold for a Code of Conduct violation."

This new disciplinary hearing is just another kangaroo court to appease the public after his bondage pictures he posted online hit the media. Jim Brown is someone we need to follow up on. Other people know what he's been up to. No matter what bullying and censorship he does, it's something that clearly won't go away. No matter how hard the RCMP brass try.

Speaking of which, if anyone out there has a copy of that picture of Jim Brown and Dave Pickton together that witnesses claim they have seen, I'd sure love to get my hands on it. I'd burr out privates of course. Nobody wants to see that. The question remains, if the police already have the picture, why haven't they done anything about it? Please advise.