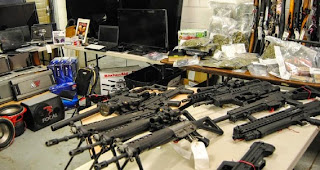 Kamloops this Week is reporting that seven people have been arrested after police found and seized 15 pounds of marijuana, 10 ounces of cocaine and 40 firearms. Police wouldn't say which criminal organization the alleged drug-trafficking ring was linked to, but Hells Angels support stickers were among the seized items shown to reporters.

Jason Robertson, 36, was one of the seven arrested. Police executed search warrants on three of his homes which resulted in the seizures. This is so bizarrely HA. Take a look at the guy. He looks like a complete idiot. A flaming Weird Hal wannabe. A total geek. Yet that firepower is staggering. He owns three homes? This is how the HAs do business. They take a complete idiot that would never make it on his own and empower him with the patch. That way they don't have to worry about him working for anyone else because he would never make it anywhere with put the patch. 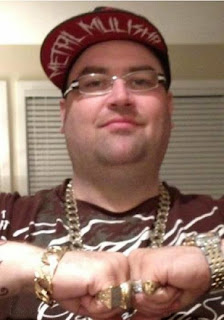