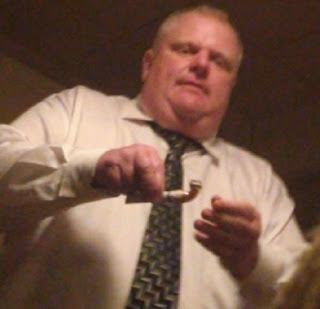 The Globe and Mail is reporting that yet another video has been produced of Rob Ford Smoking crack dated Saturday, April 26, 1:16 a.m. This time they have posted screen shots from the video.

While the Toronto Sun has reported that it has obtained a new and "raunchy" audio recording of Ford "ranting and swearing" in a Toronto-area bar on Monday night. CTV states that Rob Ford now claims he's still running for reelection but is taking a leave of absence to seek professional help. 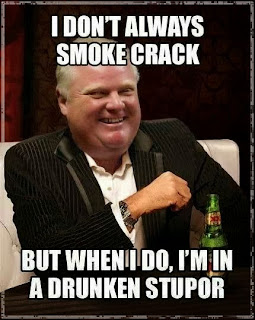 It's like over in France. Sarkozy was a dirty dog. He sucked up to Gadaffi and tried to convince the world we should trust Gadaffi with Nuclear weapons because he wanted to sell Gadaffi a French reactor while he lined his pockets with campaign contributions. Then as soon as Gadaffi says he wants to buy a reactor from Argentina instead of France, Sarkozy leads the invasion into Libya and his troops provided the cover fire for him to be brutally executed without a trial.

Not only that, but Sarkozy was involved with kickbacks from selling Arms to Pakistan going to his party's political campaign. He was also accused of being involved with the "terrorist" bombing in Pakistan after a subsequent president canceled the kickbacks. Sarkozy was as dirty as they get. So what happened? France goes and elects a Socialist. From one extreme to the other. Now Sarkozy is trying to make a comeback. That is criminal. The right wing need to pick another candidate. When the right chose criminals for candidates the left wings. It's as simple as that. Which makes you wonder if that's not the original intent.

Posted by Dennis Watson at 5:47 AM