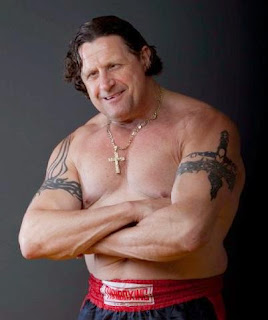 I picked up a book about the Pickton Farm a blog reader recommended called On the Farm by Stevie Cameron. I must say it is very informative. So I open up at the chapter on Piggy's Palace and read how closely involved the Hells Angels were with the Pickton farm and Piggy's Palace.

Dave Pickton claimed "he used Tony from White Knight Security for all his parties. He's an Angel. A Hells Angel." (Page 135) Dave was referring to Anthony Terezakis! The Hells Angels associate who was selling drugs in East Vancouver for the club and filmed himself beating the life out of crack addicts who owed him money.

However, White Knight Security was a reputable security firm run by a different Tony. Tony C not Tony T. Tony C was not affiliated with the HAs Tony T was. It is highly unlikely White Knight Security had anything to do with Piggy's Palace. However, the author states Dave referred to Tony Terezakis and that was a direct quote from him.

The book is very clear about the Hells Angels prolific involvement with Piggy's Palace and the Pickton farm. That's what bugs me. To my knowledge none of that was ever admitted in Willie's trial. The Vancouver Province ran an article about how a band member who played at Piggy's Palace said Hells Angels attended parties there all the time. He never testified in court. The Vancouver Province reported at the time how a woman was going to testify to that fact in court but bikers showed up at her home during the trial and she left town without testifying so none of that evidence was ever submitted to court.

When that evidence was submitted to the Missing Woman Inquiry Wally Oppal shut down the inquiry and turned it into a Panel Discussion. He banned any evidence about the Hells Angels from being admitted. I didn't realize Dave bought land on Tannery Road in Surrey for his P&B business. That's near the Jesters clubhouse.

Page 137 of the book On the Farm states: "But the truth is that almost all the people in the community knew the Palace as a wild party place with drugs and prostitutes. And everyone knew that the bikers who attended usually finished the parties at their own place across from the Pickton farm, a clubhouse that had become infamous as a booze can serving alcohol and drugs to members and friends. By the end of 1996 the neighbourhood became known in criminal circles as a biker area, one controlled by the Hells Angels."

"Off duty police officers attended the parties and so did city officials." (p 136) "He was worried they were going to get busted at the Palace... But the place was full of cops too, lots of them, all in plainclothes." (p 138) Diane Rock had vanished in October. Her boyfriend was a 34 year old longshoreman named Vince McMurchy who treated her like dirt. The book claims he said she was a piece of crap and was better off dead. (p 365) I want to follow up on the Diane Rock story. From what I hear it will blow the lid off the cover up completely.

Crimelibrary.com reported that Bill Hiscox claimed the "special events" convened at Piggy Palace--a converted building at the hog farm--where drunken raves that featured "entertainment" by an ever-changing cast of Downtown Eastside prostitutes. Sounds like there was more than one person watching the entertainment. Police telling Pickton the name of informants was astounding.

The book On the Farm stats that "Janice Edwards talked to the police about her friend and co-worker Diane Rock, whom she had picked up, hysterical and bleeding, at a gas station in Port Coquitlam in August 2001. Dianne had described being raped repeatedly in a cellar at the Pickton farm, Edwards told them; she shared everything she could remember about their conversation. Constable Sandra Lavallee drove her to the gas station where she remembered having picked up Diane." (Page 535) This incident happened before Diane Rock went missing in October 2001.

Diane Rock was hysterical and bleeding. She claimed that she was "raped repeatedly" in a cellar at the Pickton farm before she went missing. Raped repeatedly by one person? Willie Pickton? No that is not what she said. What she really did say is paramount to the investigation.

The book On the Farm later states that "Wilie Pickton was back in court on June 30, 2003, when the preliminary hearing resumed. This time the judge listened to days of testimony from 'last seen' witnesses, people who had been identified as the last people to see a victim before she disappeared... Vince McMurchy, Diane Rock's former boyfriend, was one of these; so was her friend Janice Edwards, who picked her up after Diane had been tied up and raped by several men in a building on the Pickton farm." (Page 629)

One step closer to the truth. This time we hear that Diane Rock claimed she was repeatedly raped by several men on the Pickton farm. This clearly implicates more than one suspect but there's more. She named two groups of men that raped her. A claim that Bob Paulson didn't believe. One that he, Bill Fordy and Don Adam all covered up completely.

No doubt the inclusion of Janice Edwards evidence that Diane Rock was gang raped by several men on the Pickton Farm was what led the judge to tell the jury they could convict Robert Pickton of murder even if he wasn't the only suspect or even the main suspect. They could convict him if he was just an active participant which they did. However, the integrity of a Missing Woman's inquiry would look at this evidence implicating other suspects not cover it up like Wally Oppal did.

What about this cellar at the Pickton farm where Diane Rock was gang raped? What else did the police find in it? Was Big Tony making more movies there too? What was this DVD pertinent to the Picktonm investigation the police thought Jim Brown had? Please advise.

I guess Mom Boucher wasn't the only one who broke the no rape rule.