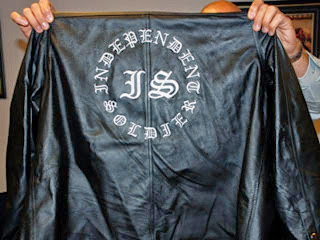 1130 News is reporting that Arash Younus and Dustin Wadsworth who police claim are tied to the Independent Soldiers face charges in Victoria after officers seized $250,000 worth of drugs from a home in Saanich. Police seized 1.5 kilograms of cocaine, 1.2 kilograms of methamphetamine and over 300 grams of heroin on April 10th in the home and a car. They also found a semi-automatic handgun, ammunition, and $6,500 in cash.

Hells Angels associates with 1.5 kilos of cocaine and 1.2 kilos of crystal meth in Saanich. Isn't that interesting. I wonder what Bryce and Ricky C have to say about that. The Vancouver Province is also reporting on the bust. I wonder how Spike's pal James Riach from the Independent Soldiers is doing in the Philippines. We know Larry Amero's pal Randy Naicker from the IS was shot dead.