The making of a Predator 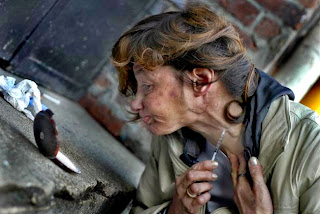 This is something I really want to drive home because it is clearly the root of the problem in Surrey and the DTES. The other day I had a talk with an old friend who still does volunteer work in East Vancovuer. Years ago we both noticed that every year there seemed to be more and more homeless and drug addicts on the streets.

East Van has always been referred to as skid road. A place where the down and out go. Back then it was alcoholics some drinking aftershave to get high. Then heroin came in and that addiction consumed the vulnerable. When crack came in the problem continued to expand exponentially.

After all these years of working in east Van my friend has noticed two things. The number of homeless and drug addicted is off the charts as is the complete feeling of hopelessness there. Back in the day people would always say Oh I'm going to get out. I'm going to get treatment. Not any more. Treatment isn't even on the table. The only thing there now is compete hopelessness. This is what the not very safe injection site has done to the DTES. It has created a forest fire of addiction and the total eclipse of any hope anyone once pretended to have.

He talked about the predatory drug dealers that exploit the homeless. He said they're easy to pick out. He talked about being in an alley meeting a 50 year old woman lying on the ground surrounded by syringes. She hadn't moved or had anything to drink for days. The drug dealer at the end of the alley was dressed like a pimp and kept getting reloaded with supplies by an SUV that drove by periodically. He kept taking this woman's money until she had none then moved on to the next mark. He is a predator.

My friend said he often tries to visualize how anyone could be so far gone and so evil to degenerate to be low enough to profit from that kind of misery. He said he couldn't imagine living life without a conscience like that. All these insane extremists that pervert harm reduction into meaning harm promotion do not have the best interest of the homeless at heart. That much is clear to anyone who walks through that hopeless exploitation.

The officer who wrote the blog of the Diary of an East Van Beat Cop admits the first question people ask is when are you going to arrest all the drug dealers? He then explains why it isn't that simple. But it is. It really is. You arrest the drug dealers and reduce the plague of poison on the street. That is the New York model. I saw it.

All our talk about reducing crime is meaningless as long as we allow drug dealers to sell crack in public. Chasing grow ops while we let crack be sold on the street is ludicrous. The problem is staring us in the face and we are all diminished when we turn a blind eye to it.

Insite is a huge part of the problem. When the not very safe injection site opened the police established a tolerance zone where they wouldn't arrest drug dealers around it. That strategy has been one colossal failure. That's like letting a forest fire burn wild. Crack dealers moved in knowing the police won't arrest them and large groups of people smoke crack everywhere in plain view on the street. People are still shooting up in the allies. Insite has not stopped that. We are using tax dollars to commit murder and claim that is somehow promoting heath when it is doing the exact opposite. This is what we need to address.

The Federal government is frustrated fighting the Supreme Court over Insite. Understandably so. The Supreme Court does not have the authority to break the law but that is exactly what they have done. Notwithstanding the fight over Insite the practice of creating a tolerance zone around Insite is a separate issue. The Supreme Court can not stop the police from arresting crack dealers outside Insite. It really is that simple. Until we do that we all become accessories to murder and the predatory drug dealers that exploit the homeless without consciousness.