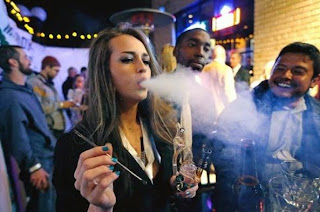 Not to flog a dead horse but I do want to address the blind obsessiveness that is driving the legalization of pot campaign which I see as cult like. I've said a million times before that there is a huge difference between pot and crack or crystal meth. A huge difference. So much of a difference that I agree it is insane to implement mandatory minimum sentences for pot when we need to deal with crack dealers not uses and violent crime.

Throwing everyone in jail for smoking pot would be a huge waste of tax dollars. Having said that I think it is really important we be completely honest and clear up some of the obsessive misconceptions about pot that many actually believe to be true despite the obvious facts staring them in the face and the huge dissinformation campaign on the internet.

Pot does not cure cancer. Chemotherapy cures cancer. Pot eases the side effects of chemotherapy. You can't get any more clear then that. When someone writes in and calls me an idiot for claiming chemotherapy cures cancer not pot I am forced to ask what else are you smoking? Years ago, if you had Hodgkin's disease, you likely died from it. Now it is totally treatable. Now many forms of cancer are successfully treated. Chemotherapy and radiation treatment are horrible things to go through but the success rate has been scientifically recorded. To say those documented cases are false is absurd. To abandon those facts and claim that pot not chemotherapy cures cancer is not only false but cult like.

I knew a guy just out of high school who was a long distance runner and liked pot. He knew smoking was bad for you so he ate it in cookies or hash brownies. The truth is, pot smoke is unfiltered and causes lung cancer even more so than smoking regular filtered cigarettes.

We need to be honest about the facts. When I see people obsessively denying the facts I'm forced to step back and reexamine their movement. Recently the Vancouver Province ran an article about pot legalization in Colorado. The picture that went with the article was a large group of demonstrators celebrating their victory and smoking pot in public. They all looked like a bunch of spoilt brat stoners. I don't go anywhere near the Vancouver Arts Gallery on 420. It's is completely out of hand. They're just a bunch of spoilt brats empowered by the mob mentality. To each their own but that is not my thing. Just so we're clear on that.

There are also concerns about ingesting pot in food. The guys at work are famous for bringing pot cookies to special events. They were all joking about one older guy who ate several of these powerful cookies and sat in his van for hours because he was totally f*cked up. I mentioned it to another old timer and he asked how many the guy ate. He was shocked and said you've only supposed to eat half of one. Well someone should have told him. Sitting in your van and getting f*cked up for hours is not my idea of a good time. Evidently they are having the same problem of controlling doses in Colorado when people ingest pot in food.

In fact, the cult like obsessiveness to legalize pot claiming it will solve all your problems and even cure cancer reminds me of the book Brave New World and how the drug Soma was used to tranquilize the masses into obeying the World State. Personally I think pot is over rated. 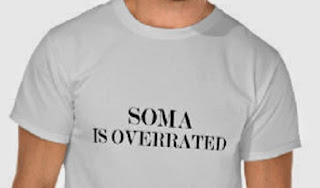