Bacchus in the news 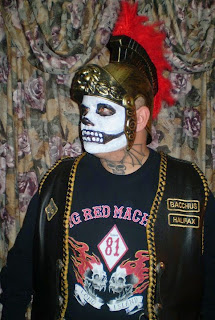 CBC is reporting that Bacchus moves into Halifax area. I'm a bit confused. I thought they were already there. Those were the clowns that were supplying PEI with drugs as well as the Halifax prison. I thought that's where the idiot Pat James with the worst ink I've ever seen having two eyeballs tattooed on the back of his head is from. These guys scream huvkleberry hillbillies.

Maybe they just mean they moved across the inlet from Dartmough into Halifax itself. CBC is reporting that they're opening a new clubhouse in Harrietsfield which is on the other side of Halifax. The Saint John Bacchus club president plead guilty to trafficking crystal meth.

There is however, a huge factual error with the CBC story. They claim the club is respected in the outlaw biker world. You have got to be kidding. Maybe in Wayne's world but certainly not in real life or in the OMG world. Look at their logo. It's the patron saint of homosexuality. Not that there's anything wrong with that but it's certainly not the logo I'd wear or respect.

We've been through this before. They all freaked out and claimed Bacchus was a Greek god of wine. No that was Dionysus. Sergius and Bacchus were two roman soldiers who were openly gay and secretly Christian. They were martyred for being Christian not for being gay. Being gay was OK back then. Now the Hillbilly Bacchus clowns back east slip into rage and denial insisting their Bacchus is the god of wine not the patron saint of homosexuality.

Yeah? Well take a look at your logo. It's a picture of a Roman soldier not of a Greek god. I joke about them being the patron saints of homosexuality. It is highly unlikely there were ever canonized but it's clear they were openly gay and secretly christian. So it is what it its hillbillies. Good luck with your Bacchus pride and your delusion about being respected in the OMG world. 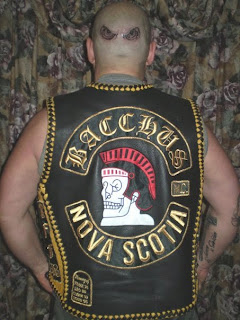 Update: CBC is clarifying that "Nova Scotia’s only outlaw motorcycle gang recently moved its lone chapter to Halifax and has a new lakeside clubhouse in Harrietsfield."